Reactions in the Presence of Irradiated Semiconductors: Are They Simply Photocatalytic?


A generally accepted classification distinguishes semiconductor photocatalysis in type A and type B. The first class comprehends reactions where the primary redox products (radical anions and cations) further evolve giving rise to the final reduced and oxidized species. Type B reactions occur when the primary redox products undergo intermolecular bond formation to addition products. Recently, some photocatalytic reactions have been reported wherein the photocatalytically produced compounds are not the final products. In fact, they react in the solution bulk or catalytically on the surface of the semiconductor with other species thus producing the target compounds. These reactions, hereby reviewed, make explicit the complexity of photocatalysis and remind scientists that, by investigating and proposing mechanistic insights, the concepts of photocatalysis and catalysis or reactions in bulk solution or in adsorbed phase may often overlap and it is useful to analyze them according to an interdisciplinary overview. For the sake of completeness, various examples of type A and B reactions have also been reviewed. 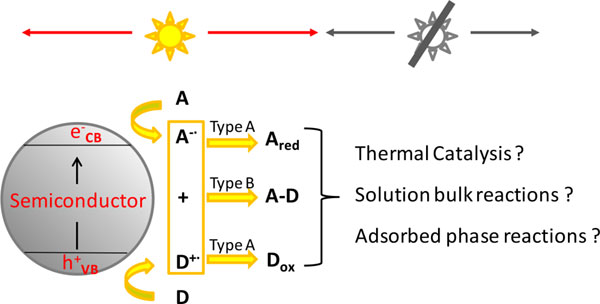